Something for every sports fan - indulge your sporting passion with our wide range of experiences at all the best UK's and Worldwide sporting events.

Packaged to make your experience complete we first of all make sure you get there and then have somewhere great to stay.

As official travel partner to most of the biggest and best sporting clubs & events, you'll have peace of mind that the ticket in your hand is official. (*where included)

The AJ Bell Tour of Britain 2023 will start in Machester City Centre. The full tour route will be announced shortly so sign up to out waitlist to kept up to date!

The TV Channel ITV4 will broadcast live flag-to-flag coverage of every stage in the UK, as well as nightly highlights show, and it will also be shown in over 150 countries worldwide.

Hospitality to every stage of the AJ Bell Tour of Britain is also available via our sister company Sportsbreaks.com. Join us at the Start Line Club to enjoy a locally produced continental breakfast and a relaxed hospitality experience in prime view of the team presentations and rider interviews, or alternatively at the Finish Line Tour Enclosure where you’ll enjoy a buffet lunch, complimentary beers, wine and soft drinks. 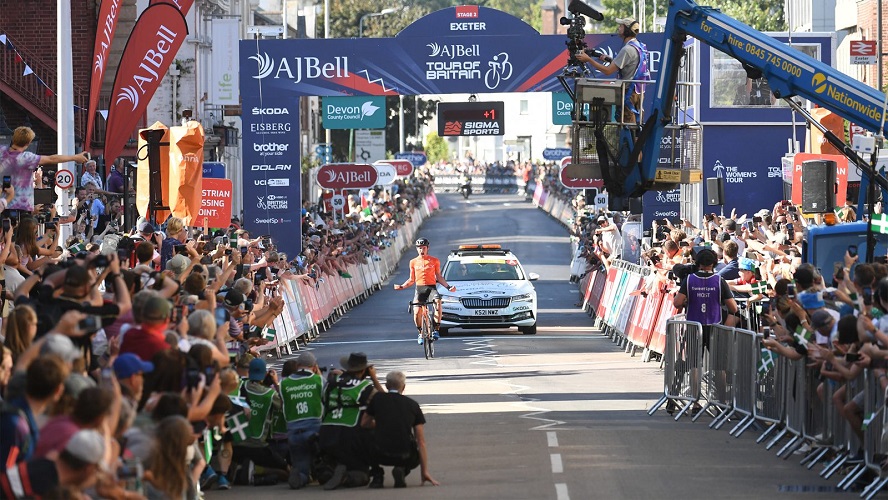 Stage one - The Grand Depart in Manchester on 3rd September is on sale now!

Watch the 19th edition of the Tour of Britain in style, we are offering a "Start line experience" that enables you to gets you closer to the riders. You will see the rider interviews, presentation and soak up the pre race atmosphere. You will also enjoy complimentary, locally produced continental style breakfast and a selection of hot and cold beverages. Choose the "Finish line experience" and you will be in prime position of the finish line and the winners podium. There is unreserved sheltered seating, live big screens so you can follow the race while enjoying a complimentary buffet lunch and a selection of hot and cold beverages including beers and wine.

Hospitality at the Tour of Britain

Price From £50 per person

Talk to an expert

Browse through our FAQs:

Leave us a message and
we will get back to you:

Take up a challenge for charity

The Destination Sport Experiences team have a combined experience of over 100 years and we have a passion for all things sports and travel. As keen runners and cyclists, our heart is put into each an every event, meaning you can be rest assured that you are in safe hands.

Your booking is safe with us

We like to take all of the stress out of your trip, that's why we ensure that your trip is protected from any unforeseen events.

Your Financial Protection - Many of the flights and flight inclusive holidays on this website are financially protected by the ATOL scheme. The Destination Sport Experiences ATOL number is 12127. But ATOL protection does not apply to all holiday and travel services listed on this website. Please ask us to confirm what protection may apply to your booking. Please see our booking conditions for information or for more information about financial protection go to http://www.atol.org.uk